THE RED KNIGHT - Miles Cameron ( A short review in English) 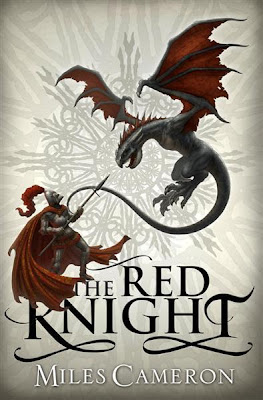 The Red Knight seems to follow the trend of "ancient past in the far future" type of fantasy, that has recently resurfaced thanks to the writing of Mark Lawrence and some other authors. It must be said that Miles Cameron manages to imply that much more subtly and without SF elements, at least so far, so his novel can not be considered to be science fantasy. He also manages to escape aping George Martin, at the same time achieving grimness and that gritty atmosphere to which many established authors aspire, but most fail to achieve. I would place The Red Knight straight in the middle of military fantasy tradition as established by Glen Cook and further developed by Steven Erikson, although his quasi-medieval setting most closely resembles the Change novels written by Steve Stirling.

The quality of Cameron's writing is superb. The language of his protagonists is as taken from the pages of Ivanhoe and I've noticed anachronistic phrases perhaps couple of times in more than six hundred pages. The language is not lifeless as is frequently the case with writers who try to achieve some kind of authenticity in their literary expression, but is very much alive and flowing - despite difficult choice of words and sometimes over the top use of medieval terms, such as names of different armor parts and such. The author has shown most detailed knowledge of the everyday life of the warrior class during the middle ages, but sometimes his overuse of expressions little known or completely unknown to the modern reader tends to encourage the reader to think that the novel is more difficult to read than it's worth. Nevertheless, Cameron's prose is excellent and quite enjoyable.

My greatest objection to this novel is abundance of PoV characters, with much too short chapters. Don't get me wrong, they are beautifully written, but sometimes PoV lasts for half a page, and then you need to adapt to another one much too quickly. This has proven to be tiresome, at least in my case.

Anywayz, this book is serious contender for the Book of the Year title, by my humble opinion, of course. 5/5
Објавио Nightflier у уторак, јануар 29, 2013