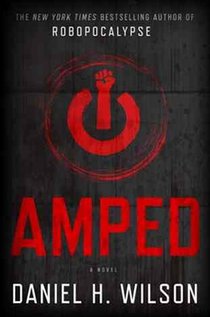 Technology makes them superhuman. But mere mortals want them kept in their place. The New York Times bestselling author of Robopocalypse creates a stunning, near-future world where technology and humanity clash in surprising ways. The result? The perfect summer blockbuster.

As he did in Robopocalypse, Daniel Wilson masterfully envisions a frightening near-future world. In Amped, people are implanted with a device that makes them capable of superhuman feats. The powerful technology has profound consequences for society, and soon a set of laws is passed that restricts the abilities—and rights—of "amplified" humans. On the day that the Supreme Court passes the first of these laws, twenty-nine-year-old Owen Gray joins the ranks of a new persecuted underclass known as "amps." Owen is forced to go on the run, desperate to reach an outpost in Oklahoma where, it is rumored, a group of the most enhanced amps may be about to change the world—or destroy it.

Once again, Daniel H. Wilson's background as a scientist serves him well in this technologically savvy thriller that delivers first-rate entertainment, as Wilson takes the "what if" question in entirely unexpected directions. Fans of Robopocalypse are sure to be delighted, and legions of new fans will want to get "amped" this summer.

With his critically acclaimed Revelation Space novels, Alastair Reynolds confirmed “his place among the leaders of the hard-science space opera renaissance.” (Publishers Weekly) With Blue Remembered Earth, the award-winning author begins a new epic, tracing generations of one family across more than ten thousand years of future history—into interstellar space and the dawn of galactic society…

One hundred and fifty years from now, Africa has become the world’s dominant technological and economic power. Crime, war, disease and poverty have been eliminated. The Moon and Mars are settled, and colonies stretch all the way out to the edge of the solar system. And Ocular, the largest scientific instrument in history, is about to make an epochal discovery…

Geoffrey Akinya wants only one thing: to be left in peace, so that he can continue his long-running studies into the elephants of the Amboseli basin. But Geoffrey’s family, who control the vast Akinya business empire, has other plans for him. After the death of his grandmother Eunice—the erstwhile space explorer and entrepreneur—something awkward has come to light on the Moon, so Geoffrey is dispatched there to ensure the family name remains untarnished. But the secrets Eunice died with are about to be revealed—secrets that could change everything...or tear this near utopia apart.

We are not alone.

On Ganymede, breadbasket of the outer planets, a Martian marine watches as her platoon is slaughtered by a monstrous supersoldier. On Earth, a high-level politician struggles to prevent interplanetary war from reigniting. And on Venus, an alien protomolecule has overrun the planet, wreaking massive, mysterious changes and threatening to spread out into the solar system.

In the vast wilderness of space, James Holden and the crew of the Rocinante have been keeping the peace for the Outer Planets Alliance. When they agree to help a scientist search war-torn Ganymede for a missing child, the future of humanity rests on whether a single ship can prevent an alien invasion that may have already begun . . . 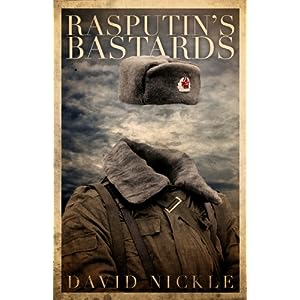 They were the beautiful dreamers. From a hidden city deep in the Ural mountains, they walked the world as the coldest of Cold Warriors, under the command of the Kremlin and under the power of their own expansive minds. They slipped into the minds of Russia's enemies with diabolical ease, and drove their human puppets to murder - and worse. They moved as Gods. And as Gods, they might have remade the world. But like the mad holy man Rasputin, who destroyed Russia through his own powerful influence, in the end, the psychic spies for the Motherland were only in it for themselves. It is the 1990s. The Cold War is long finished. From a suite in an unseen hotel in the heart of Manhattan, an old warrior named Kolyokov sets out with an open heart, to gather together the youngest members of his immense, and immensely talented, family. They are more beautiful - and more terrible - than any who came before them. They are Rasputin's bastards. And they will remake the world! 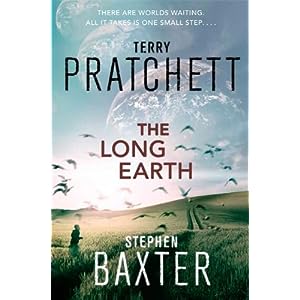 The possibilities are endless. (Just be careful what you wish for. . . .)
1916: The Western Front. Private Percy Blakeney wakes up. He is lying on fresh spring grass. He can hear birdsong and the wind in the leaves. Where have the mud, blood, and blasted landscape of no-man's-land gone? For that matter, where has Percy gone?
2015: Madison, Wisconsin. Police officer Monica Jansson is exploring the burned-out home of a reclusive—some say mad, others allege dangerous—scientist who seems to have vanished. Sifting through the wreckage, Jansson find a curious gadget: a box containing some rudimentary wiring, a three-way switch, and . . . a potato. It is the prototype of an invention that will change the way humankind views the world forever.
The first novel in an exciting new collaboration between Discworld creator Terry Pratchett and the acclaimed SF writer Stephen Baxter, The Long Earth transports readers to the ends of the earth—and far beyond. All it takes is a single step. . . .

What if being a librarian was the most dangerous job in the world? Worldsoul, a great city that forms a nexus point between Earth and the many dimensions known as the Liminality, is a place where old stories gather, where forgotten legends come to fade and die - or to flourish and rise again. Until recently, Worldsoul has been governed by the Skein, but they have gone missing and no one knows why. The city is also being attacked with lethal flower-bombs from an unknown enemy. Mercy Fane and her fellow Librarians are doing their best to maintain the Library, but...things...keep breaking out of ancient texts and legends are escaping into the city. Mercy must pursue one such dangerous creature. She turns to Shadow, an alchemist, for aid, but Shadow - inadvertently possessed by an ifrit - has a perilous quest of her own to undertake.